The presidium committee has been established to guarantee the independence of the general member assemblies (GAs). The committee is involved in all aspects surrounding the organization of the GAs. Printing ballot papers, making the agenda to taking care of the minutes are all important aspects in the presidium committee's repertoire. The members of this committee are directly chosen by the GA once a year. The committee can only consist of people who are allowed to vote on the GA, but are not part of the current board of the association.

There is an important distinction to make between the 'presidium committee' and the 'presidium'. The presidium consists of the chair and secretary of a GA. These rotate every GA, and they are responsible for a single assembly. The committee has a supporting role to the presidium, as they are a set group of people who have oversight on the current pending tasks, filed motions and standard agenda items.

Being part of the presidium committee is an interesting experience where there is a lot to learn from an organizational perspective, but also in the practical implementation aspect of a large meeting. 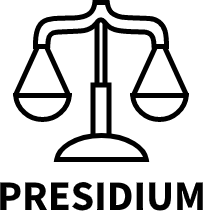